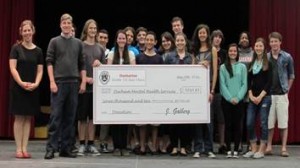 WHITBY, ON (June 23, 2014) – Durham Mental Health Services has received an unexpected windfall from Dunbarton High School’s music program, which made them the recipient of proceeds from their eighth annual Jazz Night. In total, the event raised over $7000.

The event was held at The Bridge Church in Pickering and featured performances from several Dunbarton jazz bands. There were also door prizes and raffles of items provided by local businesses including Long & McQuade, Cineplex Odeon, Shopper’s Drug Mart and Crabby Joes.

Jen Galberg is the music teacher responsible for starting and guiding Dunbarton’s annual Jazz Night tradition. “It is important to me to see my students use their talent in a way that supports the local and global community around them,” she says. “I love to see students’ satisfaction when their hard work brings such results. Each and every year, they are very proud to hand off the donation cheque to the recipient.”

Matt Bianca is a Grade 12 music student who helped organize the event and select the charity. “It was amazing to fundraise for such a worthy cause such as DMHS,” Matt says. “Our aspirations were beyond satisfied as our dedication to this project truly paid off and we were rewarded by presenting a great donation to such a passionate organization!”

DMHS Executive Director Rob Adams expressed his gratitude for the school’s efforts and for the donation. “We’re so grateful that Dunbarton chose us as to receive the proceeds from this year’s event,” he says. “We understand that this was the highest amount raised in eight years, which shows how many people recognize the importance of community mental health services. There are so many individuals and families touched by this issue.”