Several years ago, I dated a girl who had addictions. Last September, I found out that she had died. I blamed myself. I was dealing with a lot at the time – feeling burnt out at work, dealing with chronic back pain – and I started using crack cocaine to numb my feelings.

Using makes my disorders worse, and last December I attempted suicide and ended up in a coma for three days at Lakeridge Health Oshawa. I was discharged quite quickly (by telling everyone “I’m alright, I’m alright”). I didn’t see a psychiatrist and I went back to work too soon. I started using crack cocaine again in February. 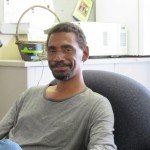 On February 28, I called into work and said, “I quit.” Then I called police and said “I have a gun and I’m going to kill myself.” I was hearing voices really bad, telling me I needed to die – “Do it yourself or NASA is going to take you out.” The police came and took me to LHO. This was the first time I met the psychiatric nurse from the DMHS’ Mobile Crisis Intervention Team (MCIT).

After I was discharged, I started back using more and more and ended up back in the hospital after another suicide attempt. During this period, I was at LHO’s Emergency Department about 15 times and every time I encountered the MCIT. They were great – they talked to me, they offered me their services, such as a stay at a safe crisis location and access to DMHS’ 24-hour crisis line. I never took them up on their offers because I was still using, and I still wanted to die.

In May, I finally went to DMHS’ Crisis Services location in Whitby. I was broke, I was tired of using, and I needed time-out. I discharged myself after five days but continued to have contact with the MCIT each time I visited LHO Emergency.

In June, I experienced bad psychosis – I blacked out for three days and ended up in someone else’s apartment naked in their bed. When the police responded, I went back to LHO. After discharge, I went to my ex’s place. I don’t know how they knew I would be there, but the MCIT showed up like angels, said “Look, Greg, we’ve got a bed for you right now,” and I accepted it.

One thing I really appreciated about the MCIT was the officer not being in uniform. For a person like me who’s had bad experiences or who gets agitated with people in uniform, this was reassuring to see. Also, I had a case conference at the hospital with all my supports and the MCIT team showed up. To see them there, and know they were there for support – it felt amazing and made me feel “I’m not alone.”

Staying at Crisis Services Ajax was such a positive experience – a turning point for me. They took care of me, but they pushed me too – to confront my lifestyle and to make healthier choices. They also set me up with the Salvation Army and helped me secure housing, but I never felt pressured to leave the Crisis bed.

I’ve been drug-free since June and I’m now able to make clear and positive choices. I’m volunteering with the AIDS Committee of Durham Region. I’ve finally made a decision to get back surgery. I’m connected with Case Management support at DMHS and addiction counselling through LHO’s Pinewood Centre. I’ve gained 25 pounds and I’m feeling healthy. I’m in a relationship – I’m taking it slow, but it’s a healthy relationship.

The medication has helped – I’ve been taking it as prescribed, so the meds are working as they should. I still hear voices daily but I’m able to cope with it – I just say, “Yeah, yeah … whatever.” The medication is doing its job, now I have to do mine – committing to work on myself, dealing with childhood issues and with anything that’s having a negative influence on my life – and that will have even more of an impact on my mental health disorders. I do want to go back to work, but I’m not ready just yet.

Without my contact with DMHS, I truly believe I wouldn’t be at this point in my life right now. They have had a major positive impact on my life, one that I truly believe has kept me alive.